Would you like to switch to the accessible version of this site?

Don't need the accessible version of this site?

Your First Visit is FREE

These are the four legged staff of the clinic. At any given time you can see one or all of them running around behind the reception desk. Their job is to keep employee morale high and to offer happy hearts and wagging tails to all of our visitors! 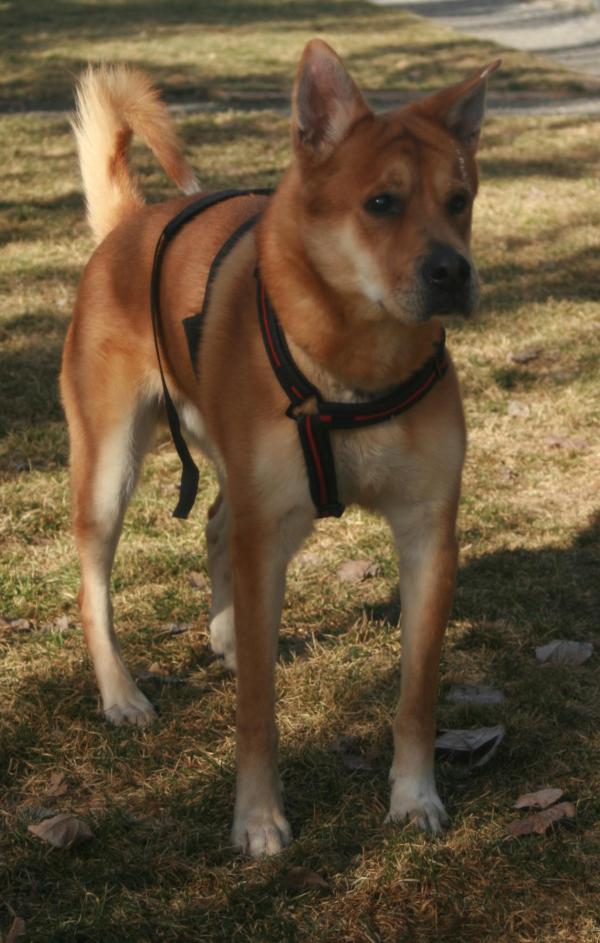 Marvin owns the place! At just a week or two old Marvin suffered a head injury and we almost lost him. Partially blind now and with some permanent brain damage, he tends to run in circles (always to the left) but he is very happy and healthy. Marvin's permanent home is with Dr Cumberland.**NOTE** Marvin had to be euthanized due to a twisted gut July 2012. We'll miss you... keep on circling Marv... 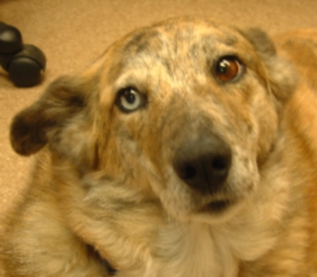 Maggie came to us several years ago as a foster dog. We shuffled her between staying at the clinic and spending time at our employees homes. We hid her from Dr Roen for several weeks until we were all attached to her! A few weeks later we convinced Dr Roen that she needed to go home with him and she's been with him ever since! **NOTE** Miss Maggie passed away in 2016. We miss you Mags! 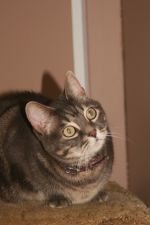 We found Peaslee outside under the bushes headed out for the middle of the road just a couple of weeks before Christmas several years ago. (That was why she was named after our street). She was very young, very cold and very wet. We took her in and warmed her up, fed her and then hid her from Dr Roen. (Us girls were notorious for that!) By the time we let Dr Roen see her we were all very attached to her so we put a sign on the front of her cage saying she was a gift for Dr Roen's dog, Maggie. It would be incredibly rude to refuse a Christmas gift, right? Dr Roen was always very wise about picking his battles so Peaslee is still a resident. She is notorious for getting into clients purses and crates and for stealing money.

Many, many years ago the local grocery store called to tell us there was a cat in their parking lot. She had been caught in the fan belt of someones car and was in pretty bad shape. They had put a ladder over her so that no one else would run her over. One of our technicians went to the store and picked her up. The doctor we had at the time was going to put her to sleep but our kind hearted technicians wanted to give her a chance so they took care of her and nursed her back to health. When she was fully recovered we spayed her and, since everyone had fallen for her, we would keep her as a clinic cat. She's a pretty old woman now but she still has free run of the place and she's still happy and healthy.  **NOTE** Fanny had to be euthanized in March 2012 due to complications of old age- we really miss you old girl...

Note: Boris is no longer with us. He had to be euthanized in December 2014 due to health issues. He was 10 years old. Rest in piece big guy! 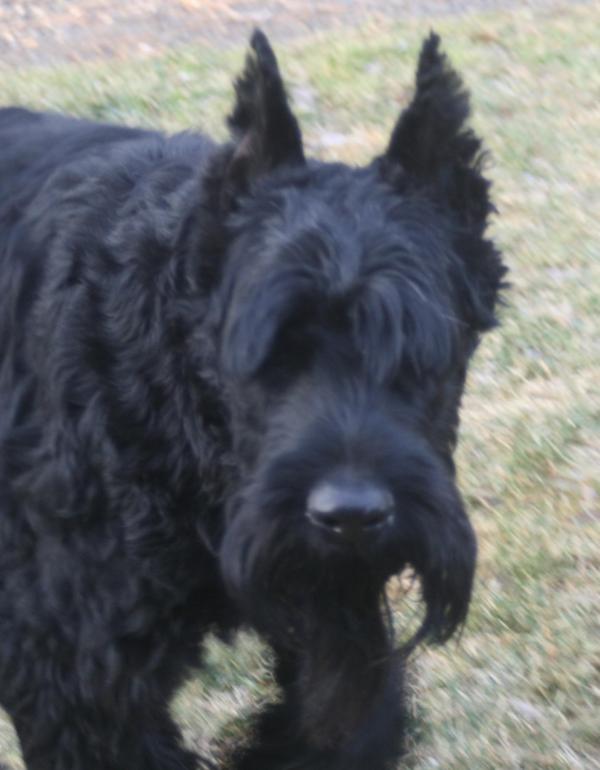 Boris is a big guy that sometimes thinks he's a little dog! A purebred Giant Schnauzer, he is loveable and goofy! He makes his home with Francse and her family when his previous owners could no longer keep him. Affectionately called Big Boris Badinoff, he likes to travel and play!

Note: Gator passed in an accident in February 2009- since he lived with the web site administrator she can't bear to take his picture down. We'll all miss you, Gator. 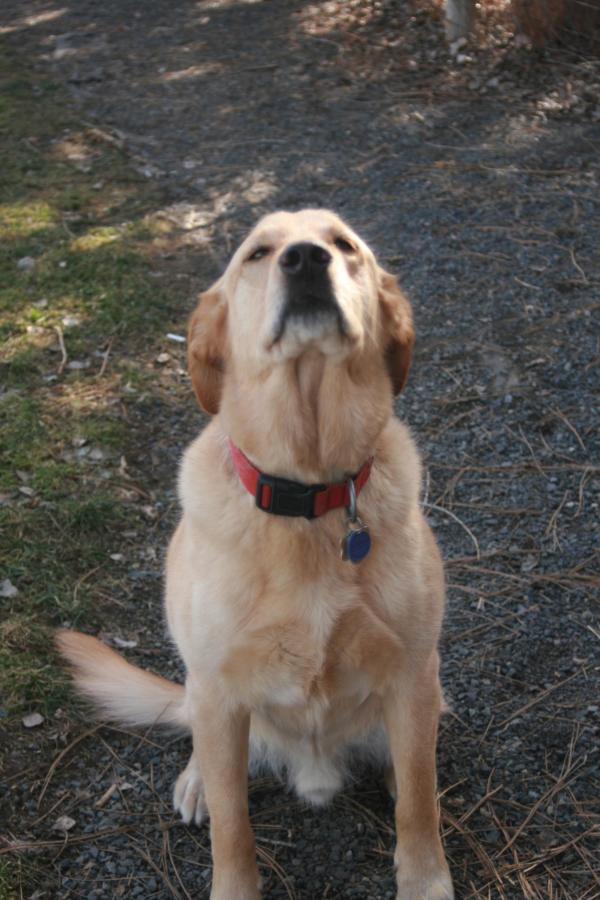 Gator is mellow and easy going and absolutely LOVES his job! When he isn't working he loves to go camping and riding four wheelers up in Waha. Gator cohabitates with Nellie at Carrie's house.

Note: Nellie had to be euthanized In January 2016 due to her health issues. She was till a young girl at only 7. We all miss you Nel!

Nellie is wild child that loves to come to work. As a matter of fact, if she doesn't come to work she will worry herself sick at home. She's a happy little dog that still has a lot of growing up to do! She loves to go camping and swimming in her off time.*NOTE* Nellie and Remington are enjoying retirement at home now that Carrie has gone to the Sheriff's Dept Licensing office! We'll miss you both!

Remington was abandoned on a rural road as a pup just before Thanksgiving so Carrie and Nellie decided to take him home! He's a goofy boy that loves his family!

*NOTE* Nellie and Remington are enjoying retirement at home now that Carrie has gone to the Sheriff's Dept Licensing office! We'll miss you both!

Jayne is a vibrant, high energy kind of dog! She's a purebred Border Collie that believes it is her sole purpose in life to control the gopher population at Donna's place and to make sure that all of the barn cats stay in good shape. She has implemented a stringent exercise program for them that utilizes LOTS of running! Kudos to Jayne for trying to make sure they are fit enough to do their very best! 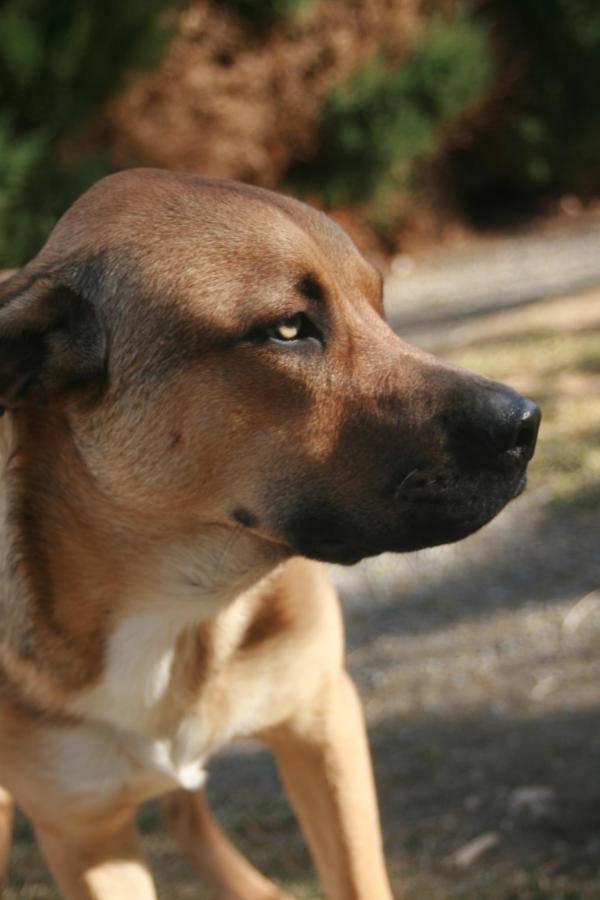 Donna and her husband adopted Marcel from the S.C.R.A.P.S. shelter in Spokane. He is a mastiff mix that doesn't know he's a big dog! He's sweet and lovable and does his very best as Jaynes assistant!

Nikki came to live with our groomer, Candi, from the Clearwater Humane Society. She's a happy, fun loving dog that loves everyone she comes in contact with, sometimes whether they want it or not! 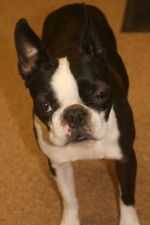 Holly's owner passed away leaving her all alone. She decided it best to go live with our groomer, Candi, and become Nikki's little sister! She's a self proclaimed princess that loves to wrap everyone she meets around her little finger... uh.. toe!

**NOTE** Holly passed away due to complications of old age.. we miss you Holly.

Reese was a pound puppy that found her forever home with Amber and her family. She's a fun loving dog, very industrius in her efforts to make 'toothpicks out of logs'- whether those logs consist of ... oh, say couches, shoes, car parts.. whatever!

*NOTE* Reese and Troll are enjoying retirement at home now that Amber has gone to the State of Idaho! We'll miss you both!

Troll was also found wandering the streets of town. She stayed with us for awhile before Amber and Reese decided to take her home. Her and Reese are now inseperable and there is NEVER a dull moment at Amber's house!

*NOTE* Reese and Troll are enjoying retirement at home now that Amber has gone to the State of Idaho! We'll miss you both! 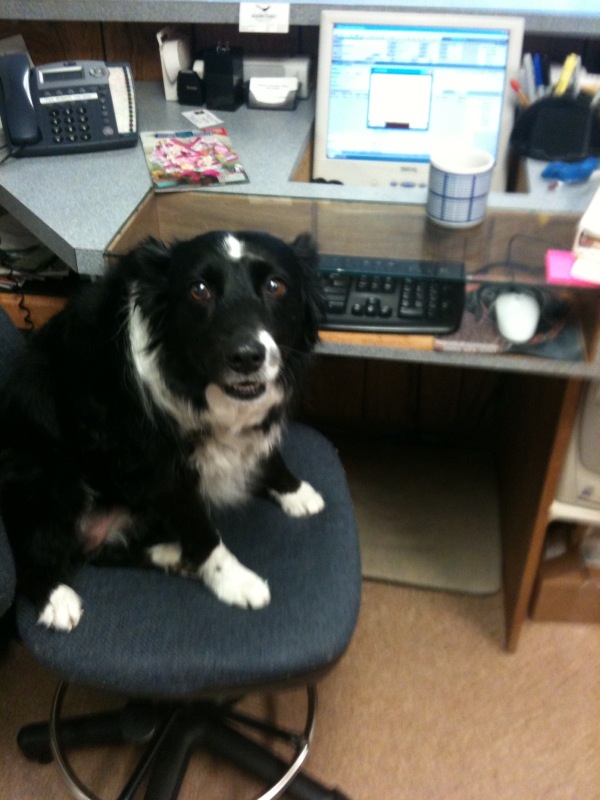 Autrey currently lives in Genessee and is working as receptionist with Carrie and Amber but she aspires to be a Veterinarian like her hero, Dr Cumberland!

*NOTE* We lost Autry in March 2015 due to complications of old age. We miss you Autry Bobbie Jean...